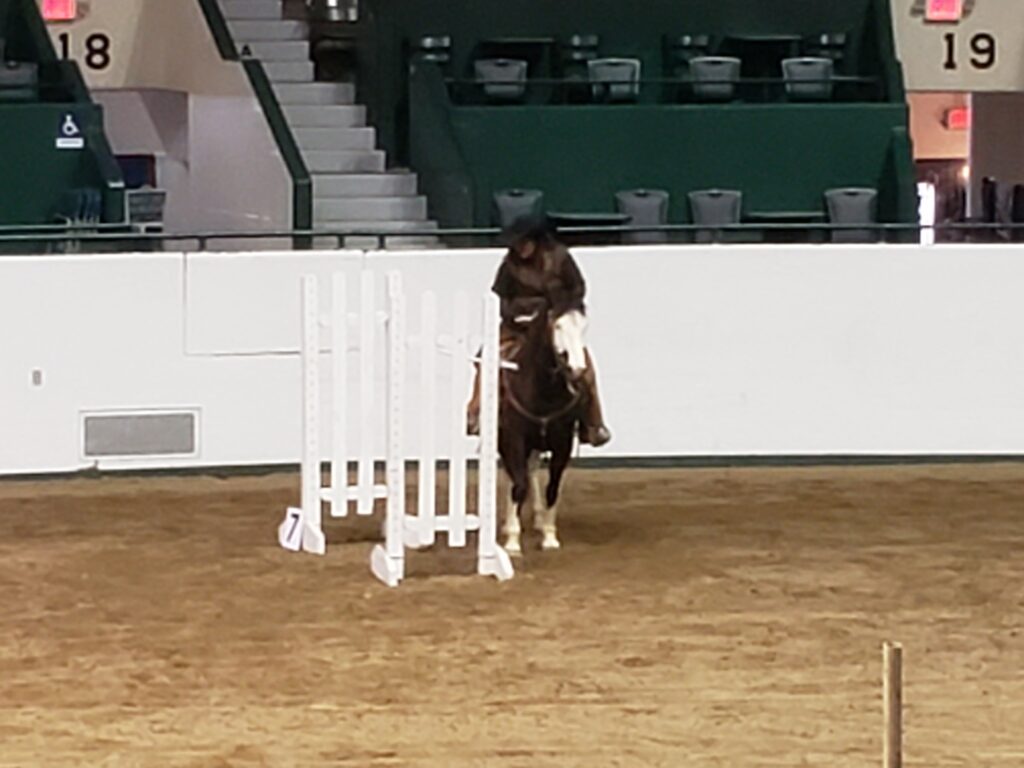 If your horse is in need of a foundation, including groundwork/saddle-starting/problem-solving, our program not only gets your horse where he needs to be with you–his riding partner–but it also provides you with the necessary communication that will keep you up-to-date on your horse’s educational journey. A private Facebook Group page will be created so that you can follow your horse’s progress from a distance and still feel like you are part of everything. We post to the group page most days. These posts will include video, photos and commentary about your horse’s progress. And you are always welcome to visit our horse farm any time you want.

In addition to a private group page, we prefer to communicate bi-weekly whether through Messenger or phone. This allows you to ask additional questions and get continued feedback on your horse.

How long will it take to train my horse?

Each horse is different in how long it takes, and it also depends on what training the horse will need.  Performance horse training can certainly take longer than the process of starting a horse under saddle. Therefore, it is best to contact us directly for a specific quote.

What will my horse learn?

All horses that come in for training, whether saddle-starting, problem-solving, or performance work, will need to be taught specific fundamental exercises both on the ground and in the saddle. Some horses can advance faster than others because they may have had some of this foundation training previously. Horses with little to no educational background may take 8 weeks to learn the ground and riding exercises within the program in order for the owner to ride them confidently both on the trail and in the arena.

Why are these fundamental exercises important for my horse to know?

Horses and humans naturally communicate in different ways. The horse thinks in terms of “safety in numbers”, “run first, ask questions later,” and they are always testing the hierarchical structure within the herd, even if that means the herd is just you and your horse. In order for the horse to trust you, he must believe in you and believe you are worthy of him following you. If he doesn’t believe in you as a leader, he will happily step into that leadership role and make all the decisions, which can put you at risk. Of course, there are some horses that are more than happy to stay at the bottom of the herd, even if that herd is just you and the horse. But horses, similar to people, communicate through body language. If the communication relays to the horse that they can take on the leadership role, they will.

When developing the relationship with your horse and getting him to trust in you as the leader, you must first gain his respect. By gaining his respect, he will see you as the leader in which he can place is confidence in and in turn, it will make him feel safe.

But in order for the horse to accept the human as leader and earn his respect, the human must be able to communicate in the way horses communicate with each other. While we do teach the horse some forms of “human” communication, we must adapt more to the format the horse understands, which is the foundation of Natural Horsemanship principals. We do this by controlling the horse’s feet (advancing movement and restricting movement) along with controlling all five body parts: head/poll, neck, shoulders, rib cage, and hindquarters. In fact, suppling the horse in all five body parts to a light cue is necessary to advance at higher levels.

I’m confused by all the ways others use to train a horse. What makes your way different?

Using the philosophy above, we break each of the steps down into pieces both for the horse and the human. That makes learning understandable for both. And pretty much everything we teach in the saddle, we teach safely on the ground first through progressive levels of pressure.

Humans, as predators, often don’t understand that to get to the final result of a maneuver or goal, there are many smaller skills that need to be taught first. For example, we get a lot of clients that want to jump ahead to making their horse “spin” like they see reining horses do. To get to the final result starts with a lot of lateral work, including yielding the forequarters on the ground first before introducing it under saddle. But before introducing it under saddle, the horse must be soft and responsive to flexing, and bending at the rib cage, as well as using more of their hindquarters (collection). People don’t just learn how to read without first learning the alphabet, then words, sentences, and paragraphs. Each skill builds upon the next. So we can’t expect teaching a horse to be any different.

Our training breaks all those pieces down for the horse to understand what we want using natural horsemanship as a way to communicate (ask, tell, command) and using pressure and release methods as horses learn from the release of pressure and not the actual pressure (stimulus) itself. We always ask with the lightest amount of pressure possible so that once the horse learns what we are asking, he can connect it with that lightest cue through the conditioned response. Some people refer to natural horsemanship as “negative reinforcement”. However, if you watch how horses communicate with each other, horses don’t offer other horses a treat (positive reinforcement) because the other horse moved away from the best hay spot or the bucket of grain. The horse is going to pin his ears first and lower his head. He might turn his butt and back into the other horse if that horse doesn’t freely move out of the way. If the horses haven’t established which one is the leader previously, they might even kick at each other or rear up and strike each other. There’s no “Hey Joe, do you mind moving away from this hay spot and let me eat here? If you do, I’ll give you a nice little alfalfa cube as a thank you.” Nope….the asking horse is likely to wallop the other horse if he wants that hay spot and to establish himself as the leader between the two of them.

Here’s a great video, “Ask the Vet-Positive Versus Negative Reinforcement for Horses”,  that explains the differences between positive/negative reinforcement, as well as positive/negative punishment and how it’s used in horse training (even dog training is starting to move to these methods as well).

That being said, once we’ve developed a solid foundation with the horse moving their feet forwards, backwards, left and right, we do use treats during liberty and trick training to show a horse what we want. But we aren’t just handing cookies out from the cookie jar. We use a “bridge” click prior to rewarding the horse with the positive reinforcement. For more information, check out Target and Clicker Training.

How much do you charge for horse training?

That all depends. It depends on what training your horse will receive when it is at our training facility.  All horses are charged for Board at $55/week for the duration of their stay.

In general, horses at our facility that need saddle starting, are here for approximately 8 -10 weeks which include all the fundamental ground exercises as well as all the fundamental riding exercises in the arena and on the trail (as long as trails are open). Additionally, we include 4 hours of training on many of these exercises for you when you pick up your horse. The flat rate for this particular training is $2500 whether it takes 8 weeks or 10 weeks.

You will also be responsible to cover the costs of farrier work, veterinarian care, health care/maintenance needs, and grain required during your horse’s stay since he will be working hard.

If your horse has any reason (illness, minor injury) preventing him from training while he is at our training facility, there will be no additional training fees. Your only costs will be for Board, farrier, veterinary care, etc.